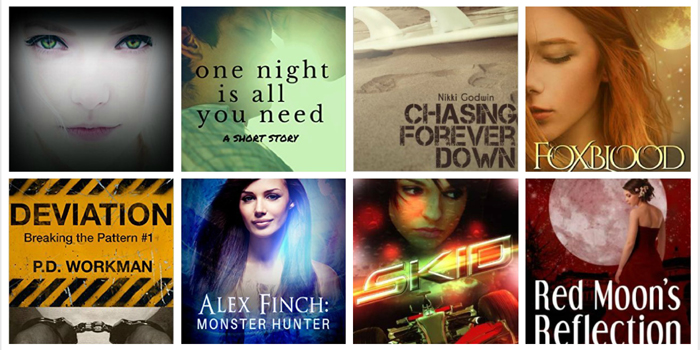 Need some new YA stories to download to your kindle but your wallet is light?

Well, good news!  There are tons of kindle stories you can download right now.  I complied a list of 8 for you to start with.

Enjoy! (the links below are affiliate links and prices can change at any time so be sure to check prior to downloading.)

One Night Is All You Need: A Short Story-
After Margot Green helps move her older sister into the University of
Miami dorms, she just wants to go home to New Jersey where she can
wallow in her loneliness. Unfortunately for Margot, her parents decide
to extend their trip to the Florida Keys where they sign up for a kooky
tour of historic Key West. Margot is horrified to have to traipse around
hotter-than-Hades Old Town with her embarrassing parents until she
meets Sam, an enigmatic local, who convinces her to embark on a spooky
adventure that will inevitably lead to discovery and heartache.

ONE NIGHT IS ALL YOU NEED is a 5,000-word YA short story that will appeal to both romance and mystery fans.

Deviation (Breaking the Pattern Book 1)-
Everyone knew that he was a good guy; geeky, responsible,
hard-working. Henry has had a lot to deal with in the past. Now, as he
should be focusing on his schooling and preparing himself for the
future, he is hindered by abuse, the challenge of raising his baby
brother while dealing with his mother’s deep depressions, and the return
of a ghost from the past Henry has tried his best to forget.

But it seems that Henry can’t avoid the nastiness of life. As hard
as he tries, it’s one more disaster after another as his life spirals
out of control. Can Henry escape the darkness, or is he doomed to be consumed by it?

Chasing Forever Down (Drenaline Surf Series Book 1)- After seventeen-year-old Haley Sullivan meets a mysterious stranger who
plays by his own rules, she’s more than determined to learn every trick
of the trade from the master himself. But her dream-chasing mentor
disappears after that night, and according to the local newspapers, he’s
been dead for years. Knowing he’s very much alive, Haley enlists best
friend Linzi to join her on a scavenger-hunt-style road trip that
ultimately lands them in the surf town of Crescent Cove, California.
Mystery guy is no mystery here, though – he’s Colby Taylor, the west
coast’s biggest professional surfer.

If Haley wants to talk to the wave rider again, she’ll have to get
past his four intimidating bodyguards who are highly skilled in the
business of sending starstruck fangirls back to where they belong. Haley
is up for the challenge if it means chasing her dreams and escaping the
perfectly corporate future that’s been planned for her. But dealing
with these bodyguards isn’t exactly what Haley imagined it’d be. Sure,
being thrown off a jet ski sucks, but falling in love with one of them
might just be worse.

Xoe: Vampires, and Werewolves, and Demons, oh my! Xoe Meyers had a normal life. So she was stuck going to high school, and she only had a few friends to call her own. She liked her normal life. Things were about to change though, because there’s a new guy in her small town, and he is anything but normal.

Before Xoe can say, “Werewolf,” her best friend’s life is in peril, and Xoe’s world is turned upside-down. Then, of course, there’s Jason. Xoe doesn’t trust him as far as she can throw him, and given that he’s a vampire, she’d have to be able to catch him first.

(This young adult urban fantasy series, is suitable for any who love fantasy, adventure, and magic, no matter their age. This vampire, werewolf, and demon fantasy is available for free to all.)

Skid (Skid Young Adult Racing Series Book 1)– Samantha drove the car that killed her dad. Now racked with guilt, the 17-year-old girl racer dedicates her life to becoming what her dad always planned her to be…a racing champion. Samantha sneaks into a private testing session and impresses the eccentric owner of a Formula One racing team who takes a chance on the crazy-talented teen girl.

His uncle owns the racing team, but the crew teases the boy like one of their own. Even the team manager orders him around like some intern. But that’s okay. Manny loves racing and dreams of designing his own race cars. Manny thinks Samantha is amazing. She can make a 720 horsepower race car dance on the track. And she’s not afraid to say what she thinks.

A Brush with the Moon (Foxblood Series Book 1)– One moment is all it takes to change your life. For Sophie, it happened the day the fox attacked her.

All Sophie ever wanted was a way out. Only a few weeks ago, she was a quiet art student with an overbearing mother and no higher dream than starting university and reuniting with her BFF, but destiny intervenes in the form of a fox bite.

If being attacked by a rabid animal isn’t freaky enough, her new town has secrets. People are dying, and Sophie feels she is being watched. Then there’s the arrogant and annoyingly sexy Sebastian with his plummy accent and come-to-bed eyes creeping her out. She should stay well away, but then he does live in the spooky manor house, and curiosity is her middle name.

Not recommended to be read by those under sixteen.

Damon tries to draw Trinity forward and when he succeeds, Tina befriends her and learns that Damon is part of the Lueeshareteers (Bloodeaters), powerful creatures old as time itself, whose three clans live in seeming peace and rule the world from shadows. After she is swept from Damon’s grasp by the Dumes, Trinity’s children, she also learns that vampires are not at the top of the food chain.

In a single afternoon Alex finds the missing backpack, has a run-in with Sam, the boy she’s had a crush on since first grade – and discovers that monsters are real.

That mind-blowing incident throws her life in a completely different direction, uncovering secrets that cost her more than she could ever imagine. And the further she digs, the darker and more dangerous the secrets become.

What else is hiding behind the ordinary facade of her California beach town?

Alex is about to find out.