So much happening lately in the world of our beloved dystopian genre, and I wanted to get you caught up so you’re “in the know” on all of this amazing news! There is a new dystopian indie movie called Divine Love that I think you’ll be interested in viewing. It promises to be non-cliche dystopian with a fresh take on the genre. I have not seen this movie yet, but if you love dystopian it might be something to seek out for something new and refreshing to watch.

Here’s something for discussion! Blade Runner, Akira, and The Running Man were all set in the year 2019 – did you know this? Do you think they hit the mark with what is happening in current events? I’d love to hear your thoughts after you’ve read this take on all three. Here’s some exciting news! Tahereh Mafi’s new novel Defy Me is available for pre-order on Amazon and releases on April 2. Be sure to one-click this or pre-order!

Juliette Ferrars isn’t who she thinks she is.

Still reeling from the explosive events of the Continental Symposium and the secrets Warner has been keeping, Juliette has nowhere to turn and doesn’t know who she can trust.

She’s desperate for answers, but to get them, she’ll have to face the nightmares that have been chasing her for a lifetime. 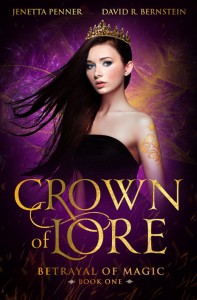 Dystopian Fantasy By Jenetta Penner and David R Bernstein to release April/May 2019. If you like Red Queen you’ll love Crown of Lore. No blurb yet, but it’ll be available soon.

Crown of Lore is the first book in a new series that David and I have been working on, entitled “Betrayal of Magic”. Soon enough you’ll start seeing some teasers for this new book on Facebook, Pinterest, and Instagram!

David and I just loved all of your reactions to our proposed covers for this book, and we hope you’re just as excited as we are for its release!

Catch Up on Some Reading!

Here are some recent blog posts you may have missed that may be of interest to you.
And Why Are You the Chosen One Again?
Who’s Your Ideal Young Adult Book Boyfriend?

If Harry Potter Died: Hermione’s Got This

Beach Culture Versus Tech Money: Fight!
The Replicant: Inside the Dark Future of Blade Runner 2049
Terry Gilliam on His Epic New Dystopian Film The Zero Theorem