It’s a new year and that means NEW books to read!  There are plenty coming out this years and I thought I would share with you some of the most highly anticipated and best reviewed Young Adult January releases.

As of writing this some of these stories have already been released so you can order those and the others you can pre-order!

(all of the below are affiliate links) 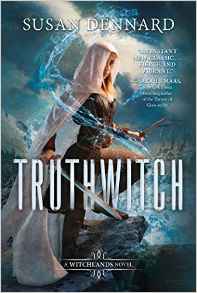 Truthwitch: A Witchlands Novel– The cover on this one is pretty fun!

On a continent ruled by three empires, some are born with a “witchery,” a magical skill that sets them apart from others.

In the Witchlands, there are almost as many types of magic as there are ways to get in trouble–as two desperate young women know all too well.

Safiya is a Truthwitch, able to discern truth from lie. It’s a powerful magic that many would kill to have on their side, especially amongst the nobility to which Safi was born. So Safi must keep her gift hidden, lest she be used as a pawn in the struggle between empires.

Iseult, a Threadwitch, can see the invisible ties that bind and entangle the lives around her–but she cannot see the bonds that touch her own heart. Her unlikely friendship with Safi has taken her from life as an outcast into one of of reckless adventure, where she is a cool, wary balance to Safi’s hotheaded impulsiveness.

Safi and Iseult just want to be free to live their own lives, but war is coming to the Witchlands. With the help of the cunning Prince Merik (a Windwitch and ship’s captain) and the hindrance of a Bloodwitch bent on revenge, the friends must fight emperors, princes, and mercenaries alike, who will stop at nothing to get their hands on a Truthwitch. 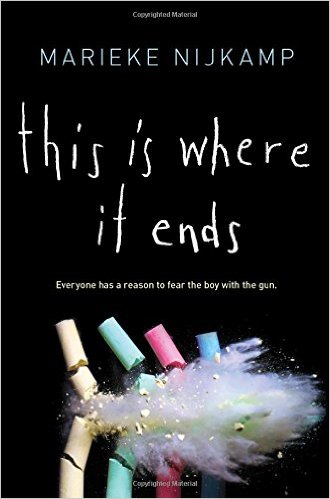 This Is Where It Ends

10:00 a.m.
The principal of Opportunity, Alabama’s high school finishes her speech, welcoming the entire student body to a new semester and encouraging them to excel and achieve.

10:02 a.m.
The students get up to leave the auditorium for their next class.

Told from four perspectives over the span of 54 harrowing minutes, terror reigns as one student’s calculated revenge turns into the ultimate game of survival. Kahlen is a Siren, bound to serve the Ocean by luring humans to watery graves with her voice, which is deadly to any human who hears it. Akinli is human—a kind, handsome boy who’s everything Kahlen ever dreamed of. Falling in love puts them both in danger . . . but Kahlen can’t bear to stay away. Will she risk everything to follow her heart? Violin prodigy Etta Spencer had big plans for her future, but a tragedy has put her once-bright career at risk. Closely tied to her musical skill, however, is a mysterious power she doesn’t even know she has. When her two talents collide during a stressful performance, Etta is drawn back hundreds of years through time.

Etta wakes, confused and terrified, in 1776, in the midst a fierce sea battle. Nicholas Carter, the handsome young prize master of a privateering ship, has been hired to retrieve Etta and deliver her unharmed to the Ironwoods, a powerful family in the Colonies–the very same one that orchestrated her jump back, and one Nicholas himself has ties to. But discovering she can time travel is nothing compared to the shock of discovering the true reason the Ironwoods have ensnared her in their web.

Another traveler has stolen an object of untold value from them, and, if Etta can find it, they will return her to her own time. Out of options, Etta and Nicholas embark on a perilous journey across centuries and continents, piecing together clues left behind by the mysterious traveler. But as they draw closer to each other and the end of their search, the true nature of the object, and the dangerous game the Ironwoods are playing, comes to light–threatening to separate her not only from Nicholas, but her path home… forever. The Love That Split the World (Release January 26, 2016) by Emily Henry

Natalie’s last summer in her small Kentucky hometown is off to a magical start…until she starts seeing the “wrong things.” They’re just momentary glimpses at first—her front door is red instead of its usual green, there’s a pre-school where the garden store should be. But then her whole town disappears for hours, fading away into rolling hills and grazing buffalo, and Nat knows something isn’t right.

That’s when she gets a visit from the kind but mysterious apparition she calls “Grandmother,” who tells her: “You have three months to save him.” The next night, under the stadium lights of the high school football field, she meets a beautiful boy named Beau, and it’s as if time just stops and nothing exists. Nothing, except Natalie and Beau.

What are the books you are looking forward most to this year?