In my journey of writing my book I have met a lot of amazing people who are on the same path.  Some of them are more experienced and have put out a ton or books and others are much like me in striving to release their first novel.

One of these people is David R. Bernstein. We have both been writing our first book and each happen to be in the sci-fi/dystopian genres.

So when he released his first book, Influence it was really something I wanted to share with you.

Here the synopsis from Amazon:

The power to “Push” can alter reality. This ability makes seventeen-year-old Kaylin a high-value target.

Kaylin has been on the run, hiding her untapped abilities for six years, but rescuing a mysterious young man risks exposing the depths of her power. Life has never been easy, but fighting back is even harder. This harsh, new world will no longer allow her to remain hidden.

I read through Influence pretty quickly (in between doing my book edits) and some things really stood out for me:

This is a great debut novel and I recommend you snag Influence for your next read if you are a Dystopian fan like me.  If you do, make sure to leave David a review on Amazon (because sharing is caring!). 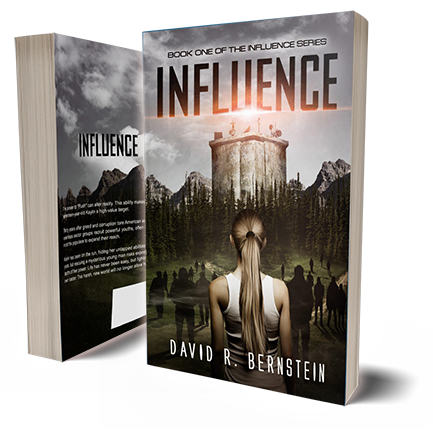